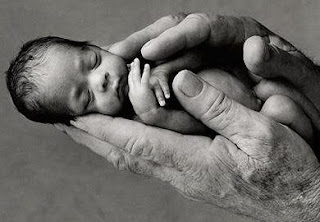 And when his family heard it, they went out to seize him, for they were saying; “He is out of his mind.”
Mark 3:21

For many years I thought that I had grown up in a “typical” family. Our family ate breakfast together, read the Bible together and joined, together, again at dinner and on Sunday we got up early, spent the morning at church, took an afternoon break and then were back in the pews Sunday evening. This was my life year after year until I went away to college and discovered that instead of living in a “majority” family I discovered I had lived in a “minority” family. Instead of “typical” my life had been very “atypical.”

Working now at a pregnancy center that supports the sanctity of life I am reminded of when Roe vs. Wade was passed in 1973. I was in high school and the general attitude amongst my Christian “family” was that this would be a passing “phase.” We assumed that we were a "majority." Unfortunately that 1973 decision has become a standard fixture in our culture. And now, 37 years later, on many different levels, I am no longer in an environment that believes the same way I do about the value of life. Even my own church denomination has waffled and shifted its stance on matters of life. I am a “minority” among some of my family and friends.

It is a comfort to know, then, that in spite of His own family thinking he was “out of his mind” Jesus kept moving forward. Their opinions did not affect his ministry. Everyday we are met with challenges that put our faith to the test. It’s not easy being in the “minority” but as we make our way towards the cross, finally coming to the empty tomb, it’s good to know that Jesus knew what it meant to be a “minority.” Everyone around Him either deserted or denied even knowing Him, in the end He stood completely alone.

He knows our loneliness, our fears, our uncertainties, but with His resurrection He proves that we don’t have to be defeated by any of these. Instead, standing in His resurrection power we can boldly say, “Yes, I may be in the minority but, I am out of my mind for Jesus!”
Posted by Valerie Jordan Mangrum at 12:00 AM