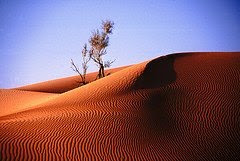 Living on the fringes of her community, Rahab was the despised woman of the night. An outsider at every level, Rahab’s future looked exactly like her present, hopeless. She didn’t "owe" her community anything given that they had invested nothing to her existence. What was there to lose from a life that had nothing? Her life, however, gains significance when Joshua’s men knock at her door.

She surely thought that the two were yet more customers coming to satisfy themselves. There was never any indication that by opening the door to them her life position would change forever. And yet, as we discover in Joshua chapter two, when she made the decision to open the door to what she assumed was another "taker" of her wares her future was completely altered.

Rahab’s life is the promise that God can, will and does make something good out of something bad. Of course, she had no idea that meeting Joshua’s men was the beginning of her good future. When they came to her door she responded with business as usual, after all life wasn’t fair and had dealt her a very bad hand.

God, on the other hand, took what was seemingly irredeemable and shaped it into good. Despite her bottom rung existence Rahab shows remarkable strength and hundreds of years later we see her name on the royal family tree. A woman, whose life was nothing, becomes a part of the heritage of Jesus, the Redeemer of the world.

Thought for the Day: What does God want to make good in my life?
Jesus, unable to see any good I find myself settling
into life’s unfairness. Thank you for taking
what I think is hopeless and shaping
it into something good.
Amen.
Posted by Valerie Jordan Mangrum at 12:00 AM