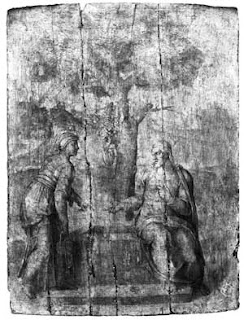 Many Samaritans from that town believed in him
because of the woman’s testimony,“He told me all that I ever did.”

Jesus and his conversation with the Samaritan woman is one of my favorites. Here is an intelligent woman, with a fighter’s spirit, who had a tough life. However, she also must have been a woman of faith. How else could she confidently debate with Jesus the finer points of his “water of life” message? Given the environment of the day the conversation should never have happened and yet it is one of the lengthiest recorded in the gospels.

Several years ago I read Obery Hendrick’s novel, Living Water, based on this conversation. As a New Testament scholar, familiar with the 1st century culture, Hendrick’s version altered my view on this woman.

Frequently we’re quick to right her off as “loose” because of her number of marriages. The conversation becomes a testimony of Jesus knowing all and offering salvation. And yet, her multiple marriages account for only 1 ½ verses in the 23 verses that tell us of their conversation. Surely, there is more to this woman than five husbands!

While the details of the Samaritan woman’s life aren’t recorded, evidence of her possible role in the community becomes apparent when she returns to town. On her testimony alone “many” Samaritans believed in Jesus.

It’s a humbling thought. When we consider our own lives perhaps a question we should ask is, “Would my testimony cause "many" to believe in Jesus?”

The woman of Samaria changed a community with eight words!