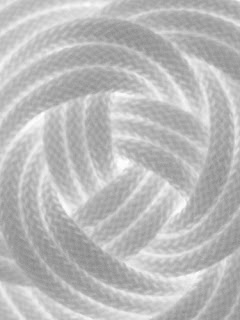 When he was alone
with his disciples,
he went over everything,
sorting out the tangles,
untying the knots.

My husband can sort out tangles. Early in our relationship I discovered this ability when I found him with a coed’s tangled mess of necklaces on a table before him. Although sometimes it took longer than others his patience always paid off because he never failed to unravel the knots. He was the “go to” guy for sorting out tangles.

Getting into a knot seems to be much easier than getting out of one. Like discovering a tangled pile of necklaces the life decisions that we make can suddenly creep up on us. The harder we try to detangle ourselves the more tightly knotted we become. We desperately need a patient hand to sort out our tangles.

During his ministry travels Jesus saw a lot of tangled, knotted up people. For some their knots were of their own making. For others their tangles came about due to illness, cultural estrangements or political decisions. But all of them needed the patient hand of Jesus to sort them out and he never failed to unravel every single knot. There were those, like the Pharisees, who in their panic knotted themselves even further, but for those who wanted to be un-tangled Jesus spoke, “Your sins are forgiven.”

It doesn’t matter what our spiritual or emotional condition may be. And, whatever the reason for our knots existence we first have to stop frantically running around trying to untie them. Our efforts alone only make them tighter. It’s time spent with Jesus that ultimately brings our tangled mess to unraveled beauty.
Jesus, time spent with you
makes things far less complicated and tangled.
Help me to remember that
whatever the situation your
hand alone will straighten it out.
Amen.
Posted by Valerie Jordan Mangrum at 12:00 AM