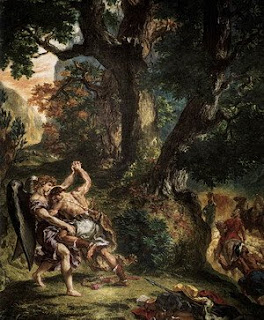 And Jacob was left alone.
And a man wrestled with him until the
breaking of the day.

A personality type exists that is relentless. They will convince, coerce, cajole, in order to get what they want. Parents of children with this personality type can be worn down, employers can become frustrated, spouses irritated. But, there is a flip side as well. The “positive” of this “negative” is one who possesses a determination to succeed, leadership skills and an unusual ability to stay focused on the goal.

Jacob was a man who demonstrated this personality. At an early age he tricked his father, cheated his brother and turned the tables on his father-in-law Laban. He made a number of people angry. On top of everything Jacob now takes on God! He’s one gutsy guy! But, here is where his negative became a positive.

While Jacob’s life is full of perfect illustrations of how NOT to live the scene that unfolds for us in this chapter of Genesis is one of a man prayer wrestling. Much like his blessing from his earthly father, Isaac, Jacob is determined to get what he wants—God’s blessing. And, his ability to stay focused on the goal leads him to a full night of wrestling with God, even getting a permanent injury as a result.

Prayer wrestling—it’s something to think about. When we pray are we intentional and focused about our goals in prayer? Are we willing to “stay up all night” wrestling with the only One who can make a difference? Next time you pray think about Jacob. His prayer method got him what he wanted in the end!

God of blessings, thank you
for your strength.
Help me to not be afraid
to spend time wrestling with you.
Amen.
Artwork--Jacob Wrestling with the Angel, Eugene Delacroix, 1854-61.
Posted by Valerie Jordan Mangrum at 12:00 AM