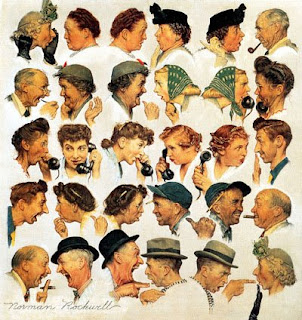 The tongue runs wild,
a wanton killer.
With our tongues
we bless God
our Father; with
the same tongues
we curse the very
men and women he
made in his image.

Christians can be brutal. I know this from experience. Preparing myself for worship one Sunday morning the woman sitting at my right turned and whispered, “You know I’ve talked to a few people who don’t think your husband is very friendly.” Another time I listened to a distraught church member recount the information she had received about the state of my marriage along with other choice tidbits. None of it had any substance. It was simply a matter of tongues running wild.

While most people would agree that “gossip” is wrong Christians have found that if they wrap it in the garment of “sharing” it has a more appealing appearance. Once while leading a Bible study in James the question was asked, “Should you listen to gossip, or should you refuse, encouraging the individual to speak to the person involved.” “Oh, honey,” replied one long time member, “people need someone to talk to and sometimes they need to just get things off their chest.”

Quite frankly, it can be kind of fun to listen to stuff about other people. Nevertheless, if what you’re hearing hasn’t been discussed with the person in question, you are participating in the destruction of the Christian community. The tongue is a wanton killer.

If our tongues both bless God and curse His creation how meaningful is the blessing? When tongues run wild ego is in control. In short, gossip is telling God that what he created is less than satisfactory. That takes nerve!

Jesus, forgive me for the
times I’ve listened to a wanton killer.
My desire is to be part of
building up your creation.
Help me to have the courage
to boldly speak against the
words that seek to destroy.
Amen.

Posted by Valerie Jordan Mangrum at 12:00 AM

How true! It is so easy to gossip under the guise of a prayer request for someone. One verse that I find particularly helpful in helping me guard my tongue is Ephesians 4:29 "Do not let any unwholesome talk come out of your mouths, but only what is helpful for building others up according to their needs, that it may benefit those who listen."