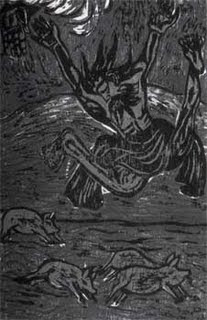 Keep a cool head. Stay alert. The Devil is poised to pounce,
and would like nothing better than to catch you napping.

My first encounter with evil happened in a church sanctuary. It wasn’t a surprise then, a few years later, that I again experienced evil while doing “ministry.” Calling out the name of Jesus to shine and expose the penetrating evil I was relieved of its suffocating presence. Don’t misunderstand me, I don’t look for evil behind every bush, but I definitely don’t take the presence of evil for granted.

The first miracle in the gospel of Mark finds Jesus in the synagogue when a demon possessed man accosts him. Jesus isn’t taken by surprise. Perhaps even the religious leaders knew that evil had invaded their holy place, but they had looked the other way. It was easier to live with the elephant than to get rid of it.

For some, talk of Satan isn’t “spiritually” correct. God fares better—He brings comfort. But, as sure as there is a God, there is Satan. He doesn’t possess any power over God, but in a day he unleashes scads of mischief, especially for a Christian. There’s no reason for Satan to work “out there” in the culture, he’s got that in his grip. The last remaining place to conquer is wherever Jesus followers gather. Destroying a body of believers is at the top of his list.

As a result of “napping” on our watch, Christianity has become an anathema in our culture. James 3:7 says that not only are we to give ourselves to God but also resist Satan. It’s the two steps together that will help us bring God’s Kingdom to others.

Thought for the Day: Are their any areas of my life or church where Satan may be at work?

Father, Son and Holy Spirit I praise you Three for the power
you have over Satan.
Let me never assume his demise but be ever vigilant
about his whereabouts.
Expose his presence with your light.
Amen.
Posted by Valerie Jordan Mangrum at 12:00 AM