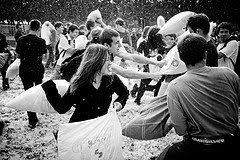 It’s a mark of good character to avert quarrels,
but fools love to pick fights.

Marriage can be a fertile ground for developing fighting skills. Two people, who up until the time of falling in love were strangers, now come together bringing with them a load of differences. A small opinion about how something is done can quickly become a battleground and the opinion holder suddenly finds himself in a dilemma—to back off or go to the mat. There are, it turns out, very few “opinions” that are worth wrestling to the point of a victory over one's lover.

For some there is a fear of becoming a doormat and so they “hold their own” against the opposition. Others have a need to dominate and still others pick fights just to “get things going.” None of it enhances the character of a person. Instead it leaves the “winner” with a false sense of victory and the “loser” flattened. Quarrels just don’t seem to accomplish very much.

Giving ground isn’t weak. To be able to relinquish oneself to another’s ideas, opinions or even quirkiness shows strength of character. Giving ground is the ability to think more of others than of oneself; responding instead of reacting.

Within the Christian community this ability is particularly crucial. Like a marriage, the church is a coming together of strangers who have one commonality—falling in love with God. But sometimes our opinions override what has brought us together and we find ourselves reacting.

To bring about peace, no matter the environment, we will need more people pursuing good character and fewer fools.


Jesus, I want to be a person of good character,
thinking less of myself and more of others.
I give you my pride, my fear and all that keeps me acting foolishly.
Amen.
Posted by Valerie Jordan Mangrum at 8:00 AM

Your selected photo was so fitting for today's blog! I wonder if this is how we look sometimes from heaven's perspective.