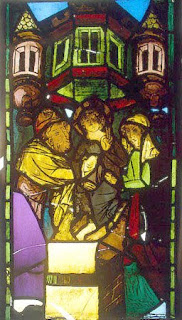 “Get out your cell phones,” yelled the 30-something tattoed minister “and text the number of one of our seven Easter services you’ll be attending.” Immediately a pie graph appeared on the jumbotron letting everyone know that over 50% of those present would be at the same service come Easter morning. I’ll never understand the mechanisms necessary to instantly calculate all those text messages. I wondered how many members of the congregation my husband pastor’s even know how to send a text message! We’ll praise God for whoever He brings come Easter!

Ministering has become complex in this age of podcasting, facebooking and web paging. Amongst ministers and church members a single question prevails, “How large is your congregation?” Small is considered unsuccessful while bigger indicates “something is happening.” And yet, not a day goes by where the media isn’t reporting on the collapse of something big.

And then these few words of reminder - great things, big things can come in small packages. Age or size didn’t matter with Samuel. God had chosen him to be the priest of His people. It’s an oxymoron “boy” and “priestly.” By all reasoning they don’t go together. But the message is clear, whoever you are, whatever you do, no matter your size God can and wants to use you in His kingdom.

As I streamed out with hundreds of worshipers I thanked God for using the tattooed, jumbotron church. But, I was also thankful that there is room in the kingdom for people who don’t know how to text message!

Thank you, God, for making
room in your kingdom with no discrimination.
Amen.

Image--Samuel Brought into the House of the Lord, stained glass, late 14th century
Posted by Valerie Jordan Mangrum at 12:00 AM