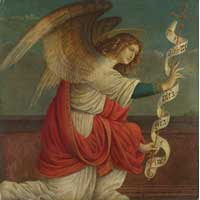 Blessed is the man who trusts in the Lord,
whose trust is the Lord’s.

Life wasn’t complicated for Mary, difficult, yes, but complicated, no. She had simple needs, was an obedient child and looked to the future with eyes of practicality. She was well aware of how her life would unfold--hard work, marriage, children, a meager life. But then Gabriel bursts into her room. With a blast of Gabriel’s light life became complicated, at times lonely and definitely uncertain. Nothing would ever be the same for Mary.

I often wonder how I would respond should a blast of angelic light burst in on my morning prayers! Without a doubt it would be terrifying! While the initial thought creates a surge of excitement a second thought stops me short. Each morning when I cry out to God for his mercy and strength what would be my response if an angel did show up? I would be afraid.

But Mary doesn’t seem to be afraid! When the heat of questions surely began, the drought of rejection had cracked her heart and loneliness settled in, she continued to have her conversation with Gabriel. "Mary, you have nothing to fear. God has a plan for you." Mary did not allow fear to have its way. Instead, in the midst of the heat and drought Mary sings! "God took one good look at me, and look what happened–I’m the most fortunate woman on earth!"

Jesus, thank you! Mary has given me hope!
She experienced suffering, the heat of rejection
and drought of loss.
Help me hear "You have nothing to fear.
I have a plan for you."
AMEN.
Image--The Annunciation: The Angel Gabriel, Gaudenzio Ferrari, before 1511. The National Gallery
Posted by Valerie Jordan Mangrum at 12:00 AM