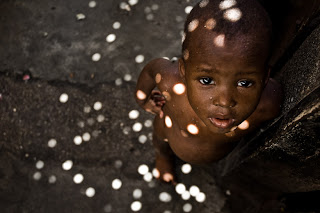 Real religion, the kind that passes muster before God the Father, is this: Reach out to the homeless and loveless in their plight, and guard against corruption from the godless world.

James 1:27 (The Message)
Beautiful, sweet, innocent faces stare out from the TV screen. Anguished, tortured cries pour out from our computer speakers. We watch with horror as Haitian scenes unfold and are overwhelmed with helplessness. Walking away we head to our church "committee" meeting where we find ourselves in a heated debate with "self" interest groups over how and where to spend mission dollars. Where is real religion?
Given the definition of real religion, as found in this passage of James, it would appear that the challenges facing Christians in the 21st century haven’t changed from the 1st century. Hundreds of years later voices clamor in order to divert our attention away from the effect of reality. While searing images of dying children and desperate women may flash before us, they are quickly soothed by a pharmacuetical's image of a good night’s sleep.
When sitting in our church's mission meeting there is the temptation to pat ourselves on the back for all the monies that we have donated. But are we connected to those receiving it in any other way than our dollars? Corruption can happen even in the church when we become consumed with the amount of money given instead of the number of hands touched.
James reminds us that to live a religion that is real is to live outside of ourselves - live in the disappointments, sorrows, discouragements of another. That is an experience money cannot buy. It's painful, but the result will be a clearer view on what is real while at the same time opening our eyes to what may be staining our souls.
Jesus, help me to live in the pain of others
whether I can touch them or not.
Make my senses alert, responding with my
hands outstretched.
Amen.
Posted by Valerie Jordan Mangrum at 12:00 AM