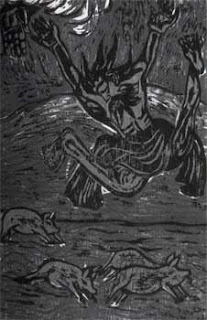 Keep a cool head. Stay alert.
The Devil is poised to pounce,
and would like nothing better
than to catch you napping.

My first encounter with evil happened in a church. It wasn’t a surprise then, a few years later, that I again experienced evil while doing “ministry.” Calling out the name of Jesus to shine and expose the penetrating evil I was relieved of its suffocating presence. Don’t misunderstand me, I don’t look for evil behind every bush, but I definitely don’t take the presence of evil for granted.

The first miracle in the gospel of Mark finds Jesus in the synagogue when a demon possessed man accosts him. Jesus doesn’t seem to be surprised. Perhaps the scribes and Pharisees knew that evil had invaded their holy place, but they had done nothing. It had been easier to live with the elephant than to get rid of it.

Talking about the Devil isn’t politically correct. Talking about God is because it’s comforting. But here’s the truth, as sure as there is a God, there is a Devil. He doesn’t possess any power over God but in a day he accomplishes scads of mischief, especially amongst Jesus followers. There’s no reason for the Devil to work “out there” in the culture, he’s already got that pretty much in tow. The last remaining place to conquer is wherever Jesus followers gather. If he can destroy a body of believers he calls it a day.

Jesus followers, wake up! We’ve been napping too long. Christianity has become an anathema in our culture because we have denied knowing that there is a Devil poised to pounce. Be aware! He works where you least expect him.

Father, Son and Holy Spirit
I praise you Three for the power
you have over the Devil.
Let me never assume his
demise but be ever vigilant
about his whereabouts.
Expose his presence with your light.
Amen.